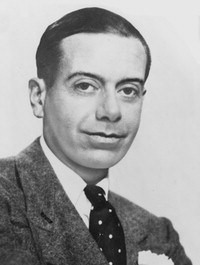 Clearly the word had gotten around the city of Houston that Cole Porter was back in town, and better still he was in the capable hands of the ever-more popularLone Star Lyric Company on the opening night of its fall Cabaret Series last Friday. The show was aptly titled “Perfectly Porter,” and the venue was Houston’s trendy, intimate and multi-tiered nightclub,Ovations. Many in the SRO audience were part of LSL’s growing fan base during the 8 years of its successful operation presenting opera, musical theatre and operetta. Adding to the popularity is the group’s Cabaret Series of the past two years, and it did not hurt at all that radio host, Ben Stevenson featured LSL Artistic Director, Kelli Estes and members of her current cast with a Porter Preview last week on his popular show,The Front Row. (Broadcast on Houston’s classical music station, KUHA 91.7).

With the effervescent Miss Estes hosting the evening, the group offered a sumptuous smorgasbord of Porter tunes. In addition to Estes, the talented vocalists included Sarah Brindley, Kelley Kimball and Hal Spencer, with Grant Martin on percussion and dazzling pianist, Joseph Li, presiding on the eighty-eight. With a variety of solos, duets and even quartets, the audience was treated to such Porter hits as “Too Darn Hot,” “Down in the Depths,” “I Hate Men,” “Night and Day,” “I Am Loved,” “What Is This Thing Called Love,” “You’d Be So Nice to Come Home To,” “C’est Magnifique,” “So In Love,” and “I’ve Got You Under My Skin.”

The singers joined forces for a sparkling finale of, “Anything Goes,” that brought cheers from the smiling crowd. It seemed Miss Estes was correct when during her introduction she mentioned a quip attributed to the late Bob Hope: “You don’t throw around the word genius very often, but I think it lands mighty close to Mr. Porter!”
Powered by